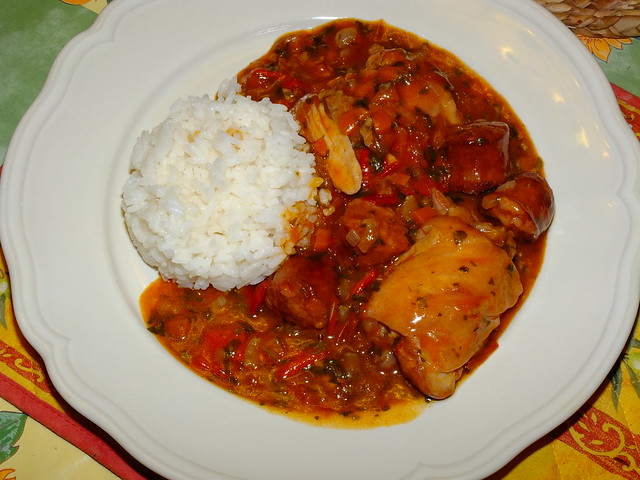 Chicken and chorizo are two ingredients that work very well together, especially in chicken and rice, known as arroz con pollo in Spanish, type dishes and in paella. END_OF_DOCUMENT_TOKEN_TO_BE_REPLACED 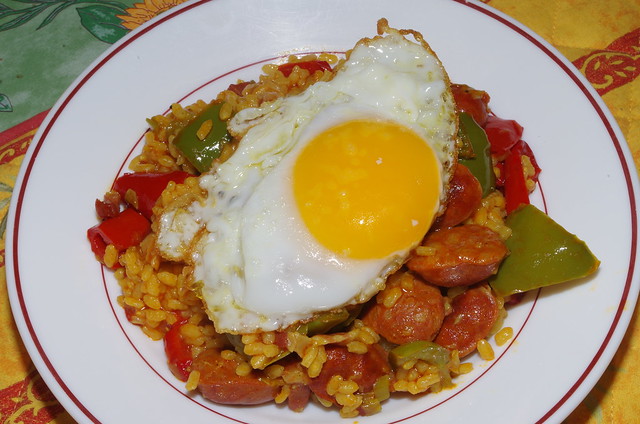 A pretty simple supper dish here. I used calasparra rice, which is used in Spain for Paella and which is becoming more widely available in the UK these days, but you could use ordinary long grain rice. END_OF_DOCUMENT_TOKEN_TO_BE_REPLACED

Although I love roast chicken, even I get occasionally bored with the standard roast chook. So, this Sunday’s roast chicken has a bit of a Spanish twist, being flavoured with garlic and smoked pimenton. END_OF_DOCUMENT_TOKEN_TO_BE_REPLACED

I really like Puy lentils, they have a lovely earthy flavour and like most pulses and legumes they absorb flavours really well. END_OF_DOCUMENT_TOKEN_TO_BE_REPLACED

A bit of a tapas-influenced meal last night.

The chicken was simply a breast, sliced into two thinner fillets, seasoned with salt, pepper and olive oil and griddled until cooked but still juicy.

The patatas bravas were peeled Charlotte potatoes, deep-fried and served on top of a thick and spicy tomato, leek, garlic and red pepper salsa, flavoured with smoked pimenton and some red chilli and finished off with a splash of sherry vinegar.

The potatoes were finished off with a dollop of garlic mayonnaise and some of the pickled pink oinions I made last week.

Some lettuce and a sprinkling of chopped parsley and there was dinner. The meats were there for flavour and interest, but for me the real stars were the potatoes.

You really need a full-bodied Spanish red wine to go with this, or maybe some nicely-chilled Spanish lager.

This is a Spanish-influenced dish, certainly as far as the flavours go. I am not sure that the way it is cooked is particularly Spanish though. END_OF_DOCUMENT_TOKEN_TO_BE_REPLACED

Pork with chickpeas and chorizo, a photo by La belle dame sans souci on Flickr.