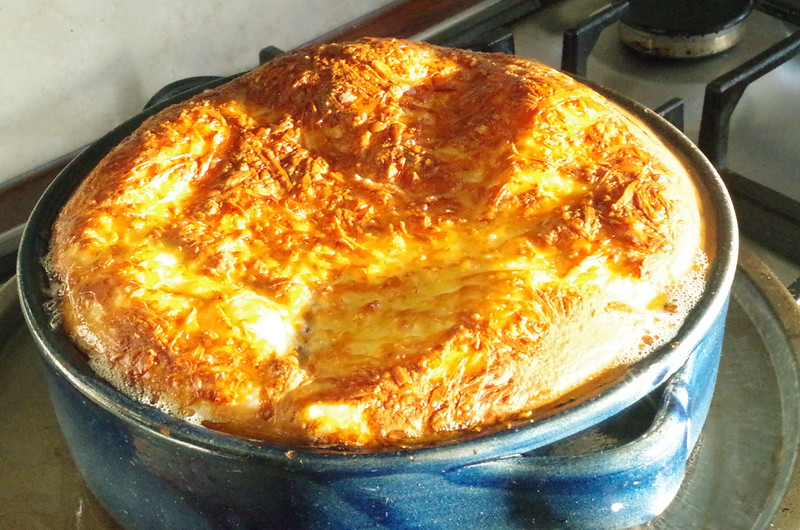 This recipe comes from Rick Stein’s TV series From Venice to Istanbul. This featured in the programme where he visited the home of the late Patrick Leigh Fermor and ate a moussaka cooked by PLF’s housekeeper, Elpida Beloyannis. END_OF_DOCUMENT_TOKEN_TO_BE_REPLACED 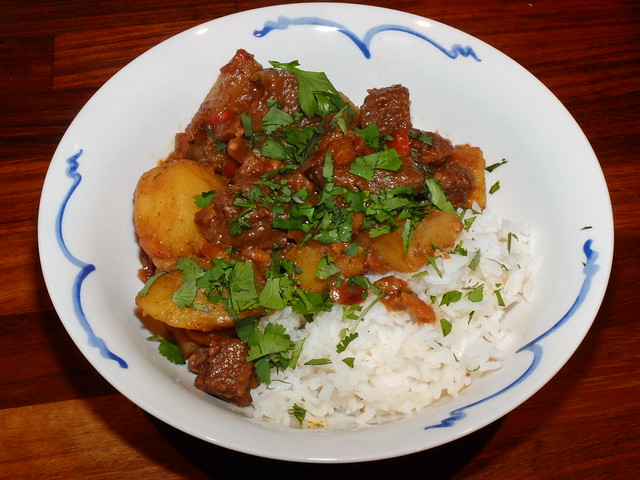 Massaman is a Thai beef curry from the south of the country where there is a sizeable Muslim community. END_OF_DOCUMENT_TOKEN_TO_BE_REPLACED 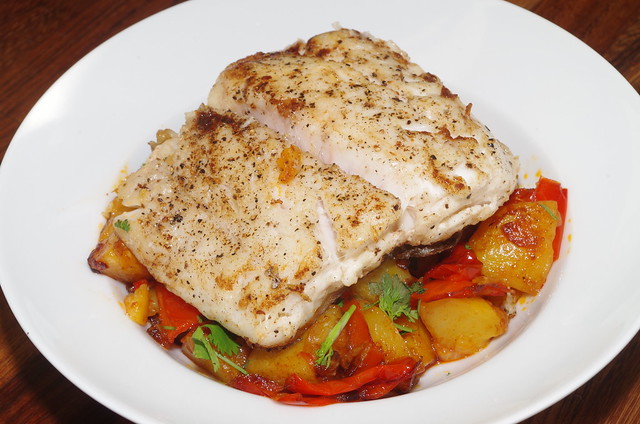 This is a Spanish-flavoured dish, because hake is a popular fish in Spain. END_OF_DOCUMENT_TOKEN_TO_BE_REPLACED 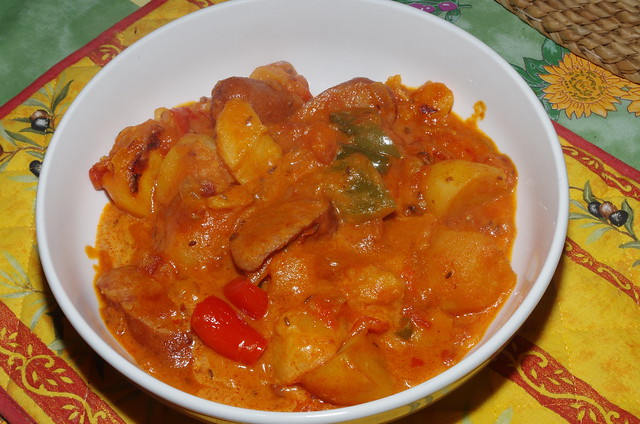 This is a kind of Eastern European-flavoured dish, probably more Hungarian than anything else and is a quick and simple thing to cook on a weekday evening. END_OF_DOCUMENT_TOKEN_TO_BE_REPLACED

This is a nice way to cook a whole fish per person.

For the herbed oil, I mixed a teaspoonful of pistou (you could use pesto, or whizz up some basil leaves with oil in a blender) with some extra virgin olive oil.

In an oven-proof dish, layer the potatoes, onion and tomatoes and season.

Make a few slashes on one side of the fish and put a half slice of lemon in each slash. Put the fish on top of the vegetables. Season again and pour over the lemon juice and wine.

Then drizzle with olive oil and bake in a 170C oven until the fish is cooked.

Serve in a shallow dish, to take the juices, drizzled with the herbed olive oil and garnished with chopped parsley. Aioli would work well with this and a glass of the same wine you cooked with would be even nicer.

Although I love roast chicken, even I get occasionally bored with the standard roast chook. So, this Sunday’s roast chicken has a bit of a Spanish twist, being flavoured with garlic and smoked pimenton. END_OF_DOCUMENT_TOKEN_TO_BE_REPLACED

I like potatoes in a curry, they absorb the spicy flavours perfectly.

Massaman is a Thai style of curry that comes from the southern, Muslim, part of the country. It is traditionally made with beef, but it works well with pork (obviously non-Muslim) and chicken too.

You can buy ready made Massaman pastes in oriental shops but I also like the yellow Thai curry pastes as well, which seem to have a similar fragrance and flavour to a Massaman paste but are lighter in colour.

I sautéed the onions, garlic and chillies in hot oil in a wok and then added the potatoes and chicken, cooking until the meat had lost the pinkness. Then I added in the paste and fish sauce, stirring so that everything was coated.

You need a fair amount of sauce, because you want a soupy consistency.

I served the curry with crisp shallots and jasmine rice.

Basically this is just a variation on roast chicken, but it owes something to trying to cook tandoori chicken. Jamie Oliver also did something similar on his recent British food series on TV.

Then you stab the chicken all over with a knife and rub the paste into the bird.

Wrap it in foil and leave for a couple of hours.

You can serve this with rice and maybe some curried vegetables, salad and flatbreads, panchporan potatoes or anything else you think will work.

We had salad and panchporan potatoes.

I made the potatoes by parboiling some floury potatoes and draining them. Then I heated up some oil and added in a couple of teaspoons of panchporan mix and a few dried red chillies.

Then I fried the potaoes on gentle heat with turmeric and salt until they were crisp and golden.

I love roast duck, but it isn’t something I want to eat frequently because it is rich meat. END_OF_DOCUMENT_TOKEN_TO_BE_REPLACED

Some plain new potatoes, poached asparagus and steamed spinach make good accompaniments to some small escalopes of turkey breast fillet, coated in flour, egg and panko crumbs and deep-fried until golden and crisp – about four minutes in oil at 180C.

You could do all kinds of accompaniments to escalopes like these; pasta and pesto would work, or pasta with a tomato sauce.

You could also serve them with potato croquettes and a cheese and mustard sauce, or a mushroom and cream sauce.

They are also nice cold, in a baguette with crisp lettuce and some mayonnaise or tartare sauce.

Turkey breast meat is lean and cheap and is ideal for cooking in this way, because the crumb coating helps to keep the meat moist and the quick cooking stops it drying out as well.